A History of Phoebe Needles

For over a century the Phoebe Needles has been a vibrant center of the community. It began in 1901 with a vision of Mr. Esom Sloan and the Rev. William T. Roberts. They built a mission school for mountain children and a church on the site where the current Center exists today. The Phoebe Needles Center is owned by the Episcopal Diocese of Southwestern Virginia.

A two story school was built in 1902. The first floor had two classrooms and the upstairs provided housing for two teachers. Emmanuel Church was built in 1903. The school provided education for the mind, body and spirit for as many as 120 children at a time. In 1911 a larger house was built for the teachers. This house exists today as the oldest building on the property, and serves as the rectory.

A snowstorm destroyed Emmanuel Church in 1914. Construction on the new church, Saint Peter’s, was begun in 1915 and put into use by 1921; although it was not completed until after 1924.

In 1917, Arthur C. Needles, President of the Norfolk and Western Railroad, donated the money to build a new school. The school was named in memory of his daughter, Phoebe, who died of meningitis at age six. Mr. Needles founded the Phoebe Needles Hall Corporation and served as president of the board until his death in 1936.

Twelve teachers served the school during its 40 plus years of operation. Miss Caryetta Davis (or “Miss Etta” as she was known) served as principal for 30 years.

A mission center was operated by Episcopal deaconesses (trained by the United Thank Offering) for 20 years after the school closed. They provided social services for people throughout the community. In the late 70’s, the Center began operating as a conference center. An expansion and renovation program began in 1998 to upgrade the facilities allowing the Center to host a wider variety of groups and serve a greater number of people. 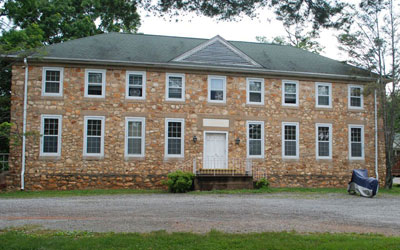